Super excited to be at the same lunch table with Mr. Philip chang who is the co-founder of PF changs ME. I’m sure you all must have been to Pf Changs atleast once, their menu and flavors are so genuine that one may find it simply irresistible to not go back. There was so much variety in the dishes I tried that day especially the few items from their newly launched menu were instant hits. 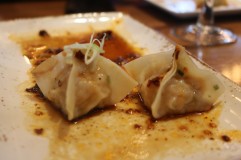 Started off with the famous dynamite shrimps. Even though there are atleast 30 restaurants in Dubai who have this dish on their menu but no one does it like PF changs because they introduced the world to it and they’re still nailing it. The main reason would be the simplicity, thier dynamite sauce is creamy and has a subtle zing unlike the duplicate ones.

The new menu had korean corn pie which was loaded with cheese and tasted quite nice. Although I wish the consistency of the pie should have been a little thicker, the flavors were great.

Also had Singaporean noodles, stir fried chicken, ceaser’s salad, chicken dumplings and so much more. Out of all these dishes the ones that stood out for me were the dumplings, they were so soft and the filling was comfortingly delicious.

They are introducing a kid’s meal called the “Bento Box” which comprises of one portion of rice, fresh fruits, vegetables on a stick, fish or chicken sticks, spring roll and a tangy sauce. My 2 year old got all excited when he saw the box coming on the table and he actually loved it.

Desserts were the best, especially the great wall of chocolate. It was the most delicious cake I have tried in a long time. Felt so satisfying, zero regrets 🙂 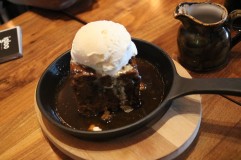 I would like to thank Team PF changs the QODE team for organizing such a wonderful lunch. The service was top notch and the team efforts were quite evident. This shall always be a beautiful day in my life as a food blogger.

Sharing my Dubai food journey with you all, because let’s just be honest. There are only a few problems in the world that a good meal can’t fix. And that’s why my reviews are 100% honest. You can trust me! now come on hit the subscribe button or do I need to convince you more?